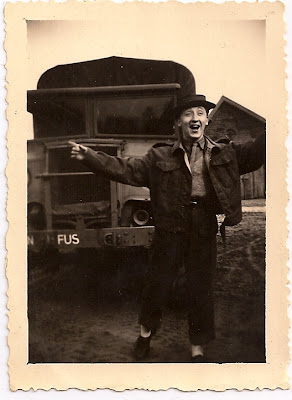 This is my father as I never knew him, in jive-hepcat mode, sporting a Lester Young porkpie, Eisenhower jacket, skinny tie, sweater tucked in, high-water pants and white socks, and looking like he's about to launch into a dance routine. (He always did identify with Gene Kelly.) The picture was taken not long after the Liberation, in 1944 or '45, when he had successfully joined the Belgian army (in 1940 he had chased it all the way to Dunkirk to sign up, only to watch from the beach as the whole force sailed off to England). You can see that the truck belonged to his outfit, the 35th Fusiliers. They wore American uniforms and employed American ordnance, because none of their own had survived the war.

I found the picture just recently, among an overlooked trove of photos he kept in a tobacco tin painted with an alpine scene by one of the German POWs he was assigned to guard in a camp outside Mons. Most of the pictures date back to those postwar days, which might have been the happiest period of his life. In them he is always the shortest (he was 5' 2") and the most antic, always front and center, grinning wildly. I was born ten years later, and while I always knew my father as a wit, I never knew him as a kat; I saw him hold forth but never saw him cut up. He was beaten pretty badly by life--specifically by factory labor, financial insecurity, emigration and consequent alienation. In the last forty years of his life (he died in 2001), he essentially had no friends.

The gaps between generations in my family are wide. At least two and as many as six of my great-great-grandparents (that's just two greats) were born in the eighteenth century. My grandfather was born in 1879, my father in 1921. I was born in 1954 and my son in 1999. My father in many ways remains a mystery to me. I intuited all kinds of stories in his past that he didn't want to tell me, presumably out of deference to my pious mother. I spent half my life hoping for some climactic old-age or possibly deathbed truth-telling, but instead he fell to Parkinson's and dementia and didn't speak at all in his last two or three years. At least I have photographs like this one, forensic evidence establishing the fact that my father had a youth. From me, in turn, my son will inherit mostly a pile of words.
Posted by The All-Seeing Eye, Jr. at 11:56 AM