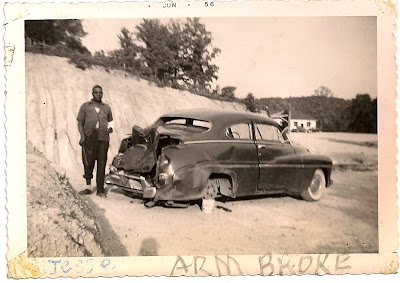 Upon seeing this image I immediately decided it was a talisman, specifically a protection against further bad luck. It establishes proof of purchase. Bad luck has been had, don't send me no more letters please. It's like the opposite of a trophy shot--instead of holding up a ten-foot marlin, the man shows off his car, his arm, maybe his ankle, and the dry gulch in which misery jumped him. I imagine him carrying the picture in his pocket at all times so that he can take it out and flash it like a get-out-of-jail card. There's a hint of that in certain blues songs: "If it wasn't for bad luck, I wouldn't have no luck at all." Surely that's more than just a recital of misfortune--it's a charm intended to reroute the dice.

I'm dogged by bad luck, not that my luck has been so bad, but that I know it might turn at any moment and bite me. This is inheritance. My mother's people were peasants, and peasants live at the whim of the elements. Because weather can change in a day and destroy your crops and ruin your life for months to come, you don't know what delicate balance of nature you might inadvertently upset through the most innocent action or omission. So even though it's not my luck that is depicted, my reptile brain imagines I can use the picture like a sort of ex voto or rabbit's foot to ward off ill chance. Maybe you'll say I don't deserve it, but that's not how sympathetic magic operates. The charm resides in the object itself. I'll nail it up on my blog like a horseshoe over the front door. Bad luck will see it and keep on driving.
Posted by The All-Seeing Eye, Jr. at 3:03 PM