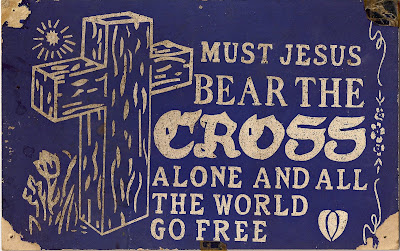 About ten years ago I found myself in a large antique store in Berea, Kentucky. As readers of this blog might suppose, I'm a veteran ragpicker, but antiques tend to leave me frosty. I made my way through three floors of the usual glass, china, old toys, rugs, without much interest and without seeing much that would indicate the store was not in, say, Litchfield County, Connecticut. Then, in a corner of the basement, on the floor, sticking out from under a bookcase, I found this sign. "How much?" I asked the guy at the counter. He looked me in the eye and said, "Just get that thing out of my sight."

It so happens that I knew the thing to be at least approximately local--the text is the first line of "Shine on Me," by Ernest Phipps and his Holiness Singers, ca. 1928, collected in The Music of Kentucky, volume one, on the Yazoo label. I recognized that by conventional standards the sign exudes a deep and rebarbative ugliness--its fifth-grade draftsmanship, its clubfooted asymmetry, its witless line breaks and lack of question mark, its ink mixed with glitter, its ancient clots of tape and the places where the tape was torn off--and that as a printed sign it doesn't even carry the aura of a singular work of folk art. I also recognized the world of guilt and fear it represents, curdling something inside even me, and I haven't been a Christian since I started wearing long pants.

I could understand how some combination of those three factors--familiarity breeding contempt, aesthetic revulsion, the clammy hand of holy writ--could have led the Kentucky shopkeeper to want the thing erased from his consciousness. He might have been a snob, but he might also have been driven out of his evangelical family on account of being gay, for example. In any case, whether or not I was influenced by his reaction, I found that at first the sign made my flesh crawl. I took it home and stowed it away in an envelope. Then I found it again a few years later, thought it was more interesting than I'd allowed, and propped it in an empty recess in a bookcase in my office. Then I thought others should see it, so I hung it in the outhouse. Admittedly it made a striking addition to the rough-hewn interior.

Now that I no longer possess an outhouse, it has migrated to the indoor bathroom. I'm set to move again, though, and I'm beginning to think the sign belongs in the kitchen. I've grown to love the sign. Although the whole subject is just lousy with ironies of various sizes, I don't think my appreciation is a matter of mere contemptible irony. But I do love it, in large part, for its very awkwardness and ungainliness. Does that mean I value it for its authenticity? But while it is easy enough to appreciate anything unprofessional, amateurish, and even slipshod these days--in reaction to a time in which clever design always means a direct threat to your wallet--not everything made by artists whose enthusiasm outran their skill and patience manages any panache. Most homespun framed homilies are just dull. This sign, by contrast, looks combustible. It is so crazy that it looks as if it will eventually consume the wall it hangs upon. Everything that is seemingly wrong about it adds up to a massive--if small-scale--imposition of will. I love the sign because it insists on squaring off with me every time I look at it. It probably wishes me ill.
Posted by The All-Seeing Eye, Jr. at 11:22 AM