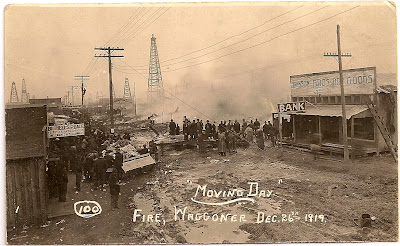 I saw P. T. Anderson's There Will Be Blood last night, and can't get it out of my head. This picture is roughly from the same time and milieu as its setting, although it sure ain't southern California--the only Waggoner listed in the Geographic Nameserver at MIT is in Montgomery County, Illinois, but I'm guessing this is the Waggoner tract outside Burkburnett, Texas. You get the gallows humor of the period and the business: the caption, obviously, but also simply the fact that a postcard was made up for the victims to send home to their families. You'll see more detail if you enlarge it; the resolution is fine and lavish with specifics: faces, bodies, and debris, including an iron bedstead and a pile of blankets and quilts.

The picture lacks the movie's epic framing, because this is a grunt's eye view. It's nicely composed, but the central figure is not one but a whole knot of guys, and the backdrop is swallowed up by smoke. Here are some of the names of the specialized occupations at an oil field of the time: twister, jarhead, mail-poucher, swivel-neck, biscuit-cutter, boll weevil, bullshitter, cat-head man, derrick monkey, fisherman, pot man, roughneck, shooter, weed whore. Those are the jobs of the men standing around, who've lost their lodgings to fire on the day after Christmas. Most of them will have traveled around from place to place, following the work, for years and maybe for a lifetime.

If you look closely to the left, you'll see that there are hundreds of people in the picture, and at least five jerry-built places of business. A Burkburnett historian (Evelyn Felty at www.trailsandtales.org) writes: "It was open season on drilling; as close as they could get and as many derricks as they could afford. There were no restrictions. Accidents were frequent. There were very few safety devices; the crews were 'green' or careless in their hurry. The wind blew down the derricks, many times hurriedly erected without guy wires. The need of the men to be near their work resulted in many tents being near the wells; then shacks, dance halls, drinking places, and small towns appeared. And the waste was terrible. The wells came in without tanks to catch the oil. Boilers exploded and fires were frequent. Newtown was wiped out three times." A sign reads: Newtown Grocery.

To properly represent the American experience, there should be as many oil movies as Westerns of the more conventional sort. It could be a genre of its own: the Oiler. There's no lack of color or story or background or character. Our excellent historian again: "One man kept seven railroad cars, paying 'demurrage' fees just for his dance hall 'girls.' Bridgetown had a dance house at one end of the street and a church at the other. By day the area looked like a burnt cut forest; by night a fairyland, with the lights on top and strung along the derricks." And yet the majority of the movies on the subject listed in the film database were made before 1920. Why do you suppose that is?
Posted by The All-Seeing Eye, Jr. at 12:08 AM