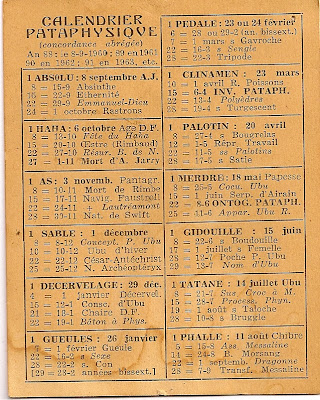 Yesterday was the Feast of Debraining, today the fifth day of the month of Debraining in the year 135 of the reign of Ubu. This calendar, a fairly exact parody of the little wallet-size calendars given out in Latin countries that name the patron saint of each day, was stolen by me in 1974 from some Paris bookstore, probably José Corti on rue de Médicis. The year-count dates from the birth of Alfred Jarry and each year starts on his birthday. All the dates record key occurrences in the 'Pataphysical--"'Pataphysics is the science"--universe, including saints' days (Swift, Rimbaud, Lautréamont) and more-or-less recondite allusions to the world of Jarry's works.

The College of 'Pataphysicians, which issued the calendar, was and is a good illustration of what happens to revolutions when they decay into fetishes, in this case of a jocular sort. Jarry was a mad genius--lack of time and space prevents my giving a full accounting, but everyone should read The Life and Opinions of Dr. Faustroll--who ably demonstrated that life is a grotesque cartoon. He undertook to upend most available conventions, down to wearing a paper shirt on which he drew a collar and tie, and eating his meals in reverse order. His heirs, after his early death, formed a genteel dining club (meals eaten in conventional fashion, all attendees in conventional attire), which assigned grandiose titles and published sumptuous ephemera relating to his remarkably coherent world-view. All the 'Pataphysical matter I possess I stole; I couldn't afford to buy them. Jarry would have stolen them, too.

The 'Pataphysical calendar is exemplary, however, and provides a good model for life as it should be lived. This month of Debraining, for example, comprises two feast days of the first degree, one feast day of the second degree, three feast days of the third degree, eighteen feast days of the fourth degree, four vacation days, and one imaginary day. And just as the 'Pataphysical calendar echoes the calendar established on Year One (aka 1793) of the French Revolution, with its bottom-up reorganization of life, so the month's name alludes to the machine à décervelage in Ubu Roi, which is a version of the guillotine--a machine that smoothly pops out the brains of the ruling class. This is something to meditate upon as we slide into the notional year 2008.
Posted by The All-Seeing Eye, Jr. at 1:11 PM