Cut With the Kitchen Knife 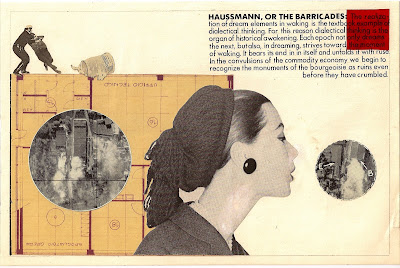 Collage was the dominant motif in twentieth-century art. Among other things it was a symbolic enactment of revolution: taking apart the detritus of the old order and refashioning the pieces into constituent elements of the new. When revolution still seemed like a promise--which was true to some degree as late as the making of this collage, circa 1982--we all had fantasies about how we'd repurpose and retrofit the appurtenances of the standing world. Maybe the French Maoists would use the inner courtyard of the Louvre to slop hogs; maybe the sex-lib people would hold giant orgies in the shells of cathedrals; maybe you and I would make our nest in the linens department of B. Altman and swim in the gutted pit of the Stock Exchange.

Collage repurposed old magazines and assorted visual junk, converting them into architects' renderings of the future, which is to say the dream state. The fact that people are still making collages today attests to the fact that the flame has not entirely gone out. Maybe. When making collages still involved scissors and glue, you had to kill one thing to make another. When the process is digital, nothing has to be sacrificed and everything is in some way provisional, no? Then again, the most vigorous field of collage in the last 25 years has been music, and there for the first time in the history of the practice you've had bloody disputes over ownership. No elderly engravers ever sued Max Ernst, and Ernie Bushmiller never lodged a claim against Joe Brainard. And when mixmasters in Rio favelas assume control over symphonies, you get something very close to the primary ambition of collage.

The other major function of the collage was disorientation--"to win the energies of intoxication for the revolution," as Walter Benjamin, author of the text cited in the collage above, put it. But is that even possible anymore? The chance meeting of an umbrella and a sewing machine on a dissecting table, unheard of 140 years ago, is banal today, when everything in the world is denatured surrealism. Realizing this is like finding out that the revolution happened ten years ago, in March, at eleven o'clock, while you were brushing your teeth. Although everything changed, so smoothly that you automatically changed right along with it, it didn't alter anything fundamental about power, or ownership. On that score, a few documents changed hands and that was that. Is it possible that the future prophecized by the collage was merely the landscape of media saturation? Or is there another shoe suspended--of which we're oblivious because our dialectical thinking has languished--that will eventually drop?
Posted by The All-Seeing Eye, Jr. at 9:53 AM