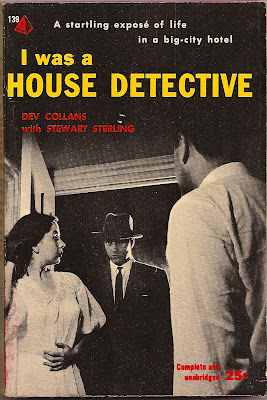 1.
The story I heard, which may be apocryphal, is that when Max Baer Sr., the boxer and father of Jethro, suffered a heart attack in a hotel, one of his entourage called out, "Send for the house doctor!" Baer, agonizing, managed to cough out, "I don't need a house doctor--I need a people doctor!" And then he died.

3.
The personal-confession genre in American popular journalism was largely the creation of Bernarr Macfadden (1868-1955), the physical-fitness guru and pulp baron who founded publications ranging from Physical Culture to True Detective and the ineffable New York Evening Graphic. His greatest success, however, was True Story, which he started in 1919 with the idea that ordinary people would pay to read about the experiences of other ordinary people, told in their own words. And he was right: its circulation hit two million in 1926. There may have been editors at the magazine, charged with correcting spelling and policing word-counts, but there were no professional writers. The authors were milkmen and laundresses and stevedores and beauticians. The vaguely popular-front aura didn't last, of course. It soon became apparent that the only ordinary-people stories readers really wanted involved sex or crime, and preferably both at once.

4.
A quiz.
A. In this dramatic low-angle shot, the P.O.V. is that of (1) a child; (2) a bound victim; (3) her mother; (4) a bottle of Old Overholt.
B. She holds her hand to her belly because (1) she feels sick; (2) she is attempting to improve her posture; (3) she has just spontaneously become pregnant; (4) otherwise her négligée would hang tentlike over her buxom form.
C. The detective has knocked on the door because (1) he wants to make sure they are comfortably asleep; (2) the other detectives have sent him there as a prank; (3) he wants to deliver a singing telegram; (4) he wants to cut in.
D. The picture is intended to make you feel (1) secure; (2) superior; (3) titillated; (4) righteously indignant.