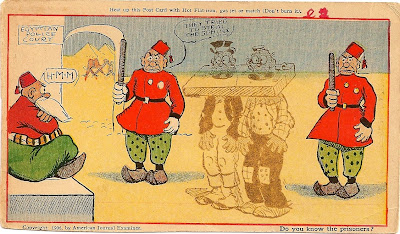 Happy Hooligans to you and yours!
Posted by The All-Seeing Eye, Jr. at 1:08 AM 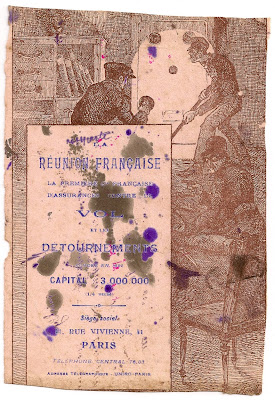 One day very soon it will happen that our heroes, having searched and studied ancient property maps on file at the bureau of records, having rented a basement storage space on the opposite side of the block, having pretended to be a punk band and carted in instruments and actually played them very loud before switching to recordings of the same stuff played just as loud, having under cover of the loudness drilled a series of guide holes in the rear wall and then chiseled out the space between those holes, having collected the rubble in small cloth sacks and carried them out to the car and dropped them off a bridge under cover of night, having at last located the rear wall of the bank vault, having clipped all wires leading from the vault, having set off a series of fire alarms to distract the authorities and blown up a succession of metal trash cans with M-80s a block or two away to further confuse interested parties, having under that combined cover blown a hole in the rear of the vault with Semtex, having made their way into the vault, will find it as empty as Mother Hubbard's refrigerator. No cash, just an assortment of worthless securities, a few blackmail-potential photographs, an A-Rod rookie card, and somebody's collection of Beanie Babies.
Posted by The All-Seeing Eye, Jr. at 6:23 PM

The Poetry of Ellery Queen 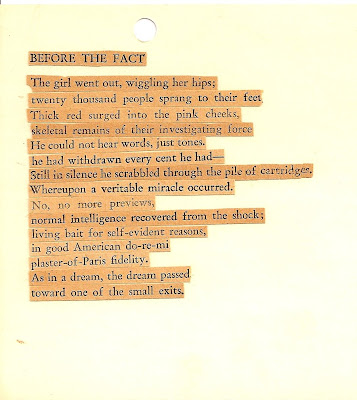 Above, a poem drawn from the depths of The American Gun Mystery (1933) by Ellery Queen (joint pseudonym of Frederic Dannay and Manfred B. Lee). The extraction was the work of an anonymous member or members of the Resurrectionists, a shadowy group devoted to finding the poetry hidden in the works of the most prosaic authors. The members never made their identities public, although rumors flew during their heyday, from the late 1950s to the mid-'70s. This anonymity, which seems to have begun as a whimsical cloak-and-dagger affectation, was before long cemented by threats of lawsuits from touchy authors. In one of their manifestos the Resurrectionists noted that they had derived their initial inspiration from Blaise Cendrars's Kodak (1924), every word of which was taken from the novels of Gustave Le Rouge, and which was threatened with a lawsuit--although the plaintiff was Eastman Kodak, and the complaint was over the title (which Cendrars changed to Documentaire, and the suit was dropped).

The Resurrectionists, who enjoyed waxing militant, calling for the abolition of "simple load-bearing literature, which trucks ideas from the factory and dumps them at your door" and the exposure of "functionaries who pretend to be writers," were actually menaced by a few of their famous victims. In 1965, Green Berets author Robin Moore was apparently set to take them to court in Florida on grounds of plagiarism and libel, although at the eleventh hour the court balked at a case directed at an undetermined number of John Does. Even earlier, Ayn Rand was said to have hired detectives to flush out the poets' identities in advance of a harassment campaign; evidently she failed. It may be hard at this late date to understand how wealthy best-selling authors could become so exercised by a marginal avant-garde prank, but the Resurrectionists seem to have had a way of exposing raw nerves, "psychoanalyzing" the books they selected and uncovering unconscious residue the authors would rather had not been noticed. Their takedown of Michael Crichton's The Andromeda Strain (1969) was so devastating he allegedly confessed to friends that he was done with writing altogether.

The Ellery Queen poem illustrated was one of their first published pieces (in The Creedmoor Review, 1956) and shows them at their most lyrical and even affectionate. In the following decade, in the climate of rebellion of the time, their work grew more pointed and aggressive. Their victims included many of the biggest names of the day: Allen Drury, Fulton Sheen, Taylor Caldwell, Leon Uris, James Michener, Bob Hope, Arthur Hailey, Erich Segal, Frederick Forsyth, Robert Ludlum. That most of them have sunk into obscurity today was predicted by the Resurrectionists again and again. "By 1980 it will be as if [James Gould] Cozzens had never been born!" they crowed in a 1957 press release. In their valedictory manifesto, issued in 1976, they foresaw the eventual end of bad writing. "Best-sellers are the preliminary step for those who are forgetting how to read," they wrote. "Soon those followers will drop the pretense and give themselves over to television and thumb-wrestling. Of course, they may take the publishing industry down with them. But that is a risk we must face. After all, almost anybody can afford a mimeograph machine."
Posted by The All-Seeing Eye, Jr. at 10:07 AM