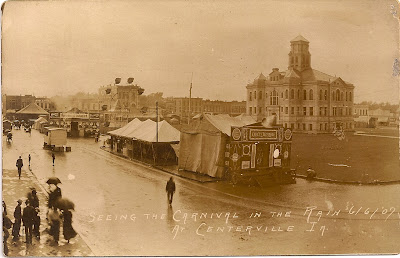 Not much is known about the Impressionist school of American postcard photography. The name itself is a latter-day coinage--we don't know whether any of those artists of the Great Plains had ever been exposed to French painters other than maybe Bouguereau. For that matter, did they even know one another? It is entirely possible that they worked in isolation, without communicating even in the trade journals, each in his own darkroom hundreds of miles from the others: the professionals in Giltner, Nebraska, and Ponca City, Oklahoma; the dentist in Ely, Minnesota; the telegraph operator in Strum, Wisconsin; the barber in Buda, Illinois.

Somehow, though, whether by coincidence or by design, they forged a style. Theirs was the melancholy of the small town on the trunk line, where the weather was always harsh, where the clarity of the prairie light was matched by the suddenness of its storms, where the county seat took on the allure of a foreign metropolis, where at times it felt like the rest of the world might as well be another planet, whose existence could only be proved by what came in the mail.

They loved their slanted truth and melancholy, those prairie Impressionists. Because they knew everybody's business, they yearned for secrets; because the light was so clear, they waited for clouds and hoped for drizzle. They liked taking pictures of picnics after they had ended, or parades before they had started. They liked night scenes, when the sparse outdoor lighting made their burgs look mysterious and a bit wild. And they loved disasters, when views they knew by heart would be haphazardly rearranged.

This picture by W. S. King is exemplary. It revels in disappointment. In a town like Centerville, the carnival was no small thing--it was one of the year's peak events, along with Christmas and the Fourth of July. For it to be rained out was enormous: nobody riding the ferris wheel, or running out laughing from the Crazy House, or trying to look sophisticated as they ventured into the Outlaw Show. His fellow citizens were crestfallen, but King was euphoric. As raindrops pattered on his lens, blurring silhouettes and smearing the light, he felt very far away, in some teeming and dramatic place where sin and doubt and complexity fell from the sky every day.
Posted by The All-Seeing Eye, Jr. at 11:07 AM