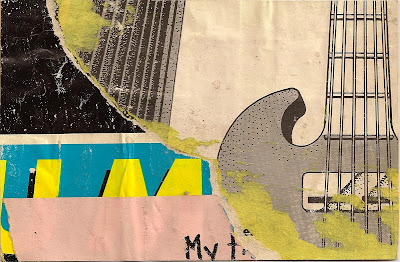 In 1985, an unknown person briefly went around tearing down sections of compacted poster-gneiss from the walls of lower Manhattan, mounted them on light stock, and sold them as postcards. I'm very sorry I only bought one; I probably thought they'd be around longer than a month. The unknown person was perhaps aware that he or she was reviving décollage, also known as lacération, the art devised by Raymond Hains and Jacques Villeglé in Paris starting in the late 1940s. The idea was that a vast, constantly renewed collective artwork was available for the taking on the walls of the city. It was a sort of readymade in Duchamp's sense, since its primary essence was commercial imagery, but it also transcended the readymade by virtue of having been serially lacerated by the crowd, who shredded the posters because they were bored, because they were angry, because they needed a scrap of paper, because they were waiting for a bus. If there ever was a populist avant-garde work, that was it.

It was the purest art of the city: open to all, viscerally satisfying, and recording an actual dialogue between citizens and the stuff they were force-fed. It was bright and explosive and hurtling toward nothingness as you watched. In New York City at the moment of the postcard the display was less bright because there was less commercial fly-postering of the type seen today--therefore less color--and much more in the way of monochrome photocopied gig flyers wheatpasted by the band members. There were still many unpoliced blank walls then and many plywood-covered storefronts, which sometimes carried so many layers of postering that sections would peel off, from combined weight, like icebergs calving. The posters were advertising of the most zero-degree sort--bands that existed for one night, bands that existed only in one person's imagination, texts written in a code understood only by the writer. The laceration therefore was less a matter of citizens talking back to authority than a phase within a cacophonous ongoing babble. The postcard, with its fortuitous subliminal impression of the World Trade Center, is a fragment of something overheard.
Posted by The All-Seeing Eye, Jr. at 7:53 AM