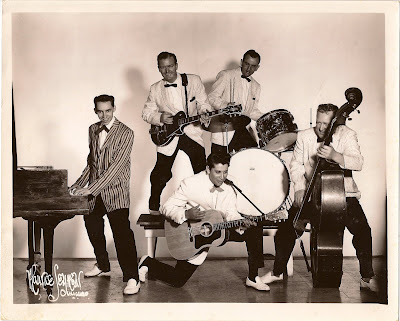 We are assembled here at the tomb of the unknown rockabilly band, somewhere on the shores of the Great American Sea. The rain is coming down slantwise, destroying our pompadours and making our string ties hang down like cooked spaghetti. We can barely hear the preacher over the torrent, but we know he is invoking the ghosts of all the failed bands from all the teenage campaigns of ages past--the doo-wop quintets who never settled on a name, the mod combos who couldn't afford matching suits, the psychedelic groups who slept through their one scheduled recording session, the punk outfits who lost key members to cough syrup or Jesus or manslaughter charges before they ever got a chance to play out. Their uneasy spirits stalk the land, infecting aspiring young players with fatal doubt, stalling the cars of talent scouts, shorting out amp connections, foreclosing on record stores.

And that is why we come here once a year to lay a wreath at the tomb of the unknown rockabilly band: to persuade them to rest, and lay off the young. But just have a look at them--they were never meant to be! They should never have tried occupying the same stage, and they should have left music to find its own way home. The piano player, with his incipient Mickey Mouse ears, was clearly destined for a career working with puppets. The twins on guitar and bass were natural-born casino greeters. The other guitarist has the fine tapered hands of a pest-control agent specializing in silverfish. And the drummer--he was meant as an example. What happened to him should have been shown to driver-safety classes in every high school in the country.

So that is perhaps the true meaning and significance of the unknown rockabilly band. There is a reason why they and their fellows trip up young musicians and dash hopes nurtured since childhood! They act out of kindness, based on their own sad experiences. They want to save the young from mediocrity and failure--or far worse, mediocrity and success. They are like Flannery O'Connor, who when asked whether she thought university programs discouraged too many writers, replied that they didn't discourage enough of them. But pop music has no university programs. At least not yet.

We should gaze upon the image of the unknown rockabilly band, captured in all their semblance of glory by Maurice Seymour of Chicago, and savor the fragile pantomimed ambition, the jackleg bravado, the rented instruments, the press-on smiles. We should earnestly thank them that they favored us with stage fright and bad haircuts and imperfect pitch at the right time and saved us from a lifetime of bitter regret if not one of endless lawsuits. One day, when all music is made by combinations of small and unassuming oblong boxes, the unknown rockabilly band will at last be able to sleep.
Posted by The All-Seeing Eye, Jr. at 5:17 PM