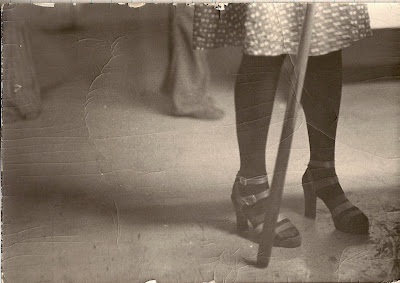 I can very nearly zero in on the exact year in which this picture was taken. 1972, I'm guessing. The conjunction of those fuck-me shoes with those floor-dragging bells in that pool-table backroom of that bar. I can hear the music, smell the drugs. No earlier than 1971, anyway, and probably no later than about 1974. I wish I knew more, could see past the frame, but I'm not even sure where and when and how the picture fell into my hands. I've certainly had it a lot longer than the original owner did--I think it may have fallen out of a book when I was working at the Strand thirty years ago.

There are many things I like about the picture: the subject, the framing, the gray-scale palette, the teetering on the line between history and nostalgia (as much as I profess to despise nostalgia, I have to admit that I indulge in it). I also like its patina. Its edges are scarred, with bits of emulsion chipped off, and with a slight curl like the edges of a parchment manuscript. And the whole surface is striated with a pattern of crazing that looks like shattered glass, or like rivers and streams feeding into an estuary. This probably results from unsatisfactory printing. My guess is that the photo was taken and processed by a student.

I've found that I can nearly always upset photo collectors--on those rare occasions when I've encountered them--by saying that I like old photographs to show their age. I like the blunted corners, the slight fading, the partial fingerprints, the damaged mattes, the hints of solarization at the edges, the first signs of foxing, the bolted color processes, the occasional writing or scribbling on the surface. Those constitute proof of the passage of time, of the specific and irretrievable emotional connection that people I'll never meet once had with the picture, of the inescapable power of decay and entropy, of the materiality of photographs. No photograph can be considered as identical to its content; every photograph is an individually wrought object that has passed through hands, rooms, climate, and every photograph is a grinning skull.
Posted by The All-Seeing Eye, Jr. at 1:42 PM