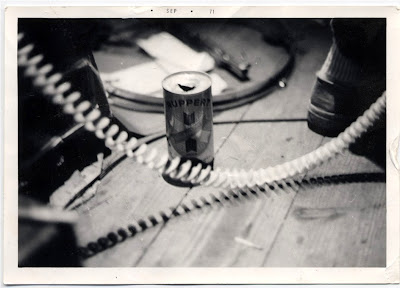 Can of Ruppert Knickerbocker "opened with an axe," as it says on the back of the print. Ruppert was the last beer brewed in Manhattan and the most godawful pisswater ever, although it may have been better back when Colonel Ruppert owned the Yankees. It was also the cheapest beer sold in New York circa 1970, and so well within the budget of teenagers, who had no trouble buying it at supermarkets, grocery stores, bodegas, just as they had no trouble going to liquor stores and buying Yago Sangria or Boone's Farm Apple Wine, or the hi-test option, Richard's Peach Wine. The trouble lay in figuring out a place to go drink it, when the park was too cold or too far away. The default option was, for some reason, the sidewalk in front of the old West Side Airlines Terminal, which must have stood somewhere in the general vicinity of Times Square. How it differed in ambiance from other stretches of sidewalk is a detail lost to time. Other substances were more of a gamble, because they had to be purchased from chiselers and layabouts, and the teenagers lacked experience, so that they often came to the belated realization that they had just acquired some very expensive aspirin or oregano.

This commerce and consumption was not recorded at the time, which is a pity. Instead the camera sought out the ensuing hilarious hijinks, which have not weathered the years well. The camera is unkind to hilarity. Hijinks only look funny for about a week. But the photographer had talent, although he didn't pursue the matter for long, going on to other ambitions, notably poetry, to which he transferred his eye and his power of suggestion. Maybe you get an idea of the talent from this shot, which suggests a lot of teenage business in economically elliptical fashion. That phone cord could just as well be a guitar cord, and the floor a stage, and the heel could be airborne for any number of reasons. And the can of Ruppert is the vortex, apparently the casus belli of a storm of unseen activity. Outside the frame was probably a bedroom, and outside the bedroom Stuyvesant Town, 14th and C, in my memory of the time forever being circled by the deafening choppers of the Third Street Angels. The city was a lot bigger then, its people huge and its dramas overwhelming, and only in part because I was so small in relation. The photographer, being a native, was unimpressed. He was my Virgil.