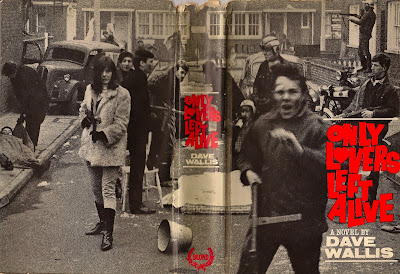 You remember "Sten guns in Knightsbridge/ Knives in W11"--those are sten guns. Only Lovers Left Alive, by Dave Wallis (London: Anthony Blond and New York: E. P. Dutton, 1964) was one of many salvoes in the war. You remember the war, which began with Marlon Brando riding into town in The Wild One, or maybe Michel Mourre proclaiming the death of God from the pulpit of Notre-Dame, and ended--where and when? At Woodstock or Altamont? With the firebombing of the S.L.A. house in Inglewood, California in 1974? At Stammheim Prison in 1977? With the ascendancy of Reagan/Thatcher and the triumph of real estate? Your call.

The book is long out of print and deservedly so. In a nutshell: everyone over 30 conveniently commits suicide, and then the now colossal youth are faced with the problem of having to invent Society, which they accomplish by reverting to tribal archetypes. Would've made a great movie, though--both Nick Ray and the Rolling Stones optioned it, separately. But maybe the movie was made redundant by the dust jacket. The dust jacket is the whole show. That and the title.

The photograph looks like a concatenation of images from the following decade-and-a-half. It's the Baader-Meinhof Gang in the street in May '68, with perhaps the Subway Sect playing on a flatbed truck outside the frame. But there are also strong echoes of Budapest, 1956, for example, and remember that the book came out right in the middle of the mods-vs.-rockers fray; if I'm not mistaken it was actually published just before the epic seaside riots of the summer of '64. The picture, by Bruce Fleming, is somehow both amateurish and realistic--amateurish in its idle toss-up of elements (is that mattress there for the barricade or the party? is the guy on the left wounded or sleeping it off?) and realistic, likewise, in its idle toss-up of elements. It does make sense that Chrissie Shrimpton (let's just call her that) is vigilant, and Blurred Punk is agitated, and everybody else is merely farting around. What happens during a revolution? I've never been to one myself, but I imagine that, exactly like a film shoot, a revolution involves endless stretches of nothing much. That's the part generally left out of all accounts of human activity, historical and otherwise: the numbing boredom of waiting for something to happen.

In that sense the picture is a good match for the book: both primarily express a sense of anticipation. The book is not so much a youth-in-revolt novel as the announcement for one, destined to be made obsolete by the arrival of the real thing. (Never mind that, despite sundry attempts, the real thing never did materialize in any satisfying form; never mind, either, that Wallis's aim was satirical and rather anti-youth--with that title and that image, who would have noticed?) The image not only depicts dull standing-around-waiting, albeit with weapons and motorbikes, but it invites the youth of 1964 to enact the picture themselves, to go out and stage their own revolution.

The following decade and a half was studded with attempts to take up the invitation. For that matter, the period never entirely ended--check the Black Bloc aesthetic on view here, with crash helmets and bandannas. And we are primarily talking aesthetics here. Youth-in-revolt may have been concerned with war, justice, racial equality, redistribution of wealth--but nobody would any longer be fool enough to deny that sex, intoxicants, black leather, and acting out your favorite movies weren't equally important. Thus this image survives as a keystone, a billboard, a lifestyle advertisement. One of these days the mise-en-scene will be duplicated on behalf of Diesel Jeans, if that hasn't happened already. Nothing, least of all the deaths of some of those who tried to enact the image for real, has ever caused its allure to pall. It is dashing and sexy and noble and dramatic, and it is also doomed, and youth finds few things sexier than doom.
Posted by The All-Seeing Eye, Jr. at 3:16 PM