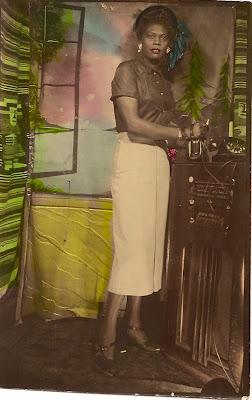 Let me start out by taking questions from the audience.

Yes, it's been hand-tinted, which is to say painted, with water colors in this case. Because while color photographs existed and were highly desirable, they were new then and rather expensive. I'm guessing late 1940s, maybe early '50s. Very odd, as if she were visiting a colorized alternate reality and had bought a hat there. No, that's a radio. Yes, radios looked like that in the 1930s and '40s--as late as the early '60s in some parts of the world. You're right, it does look a bit like a switchboard, but that's just the telephone wire dangling down over the radio; the wire isn't actually plugged into it. A telephone and her handbag. Yes, she's resting her hands on her bag. Looks like a cigarette to me, but I can't be certain. Two Indian blankets--maybe I should put air quotes around the word "Indian"--framing a painted backdrop. Yes, that's actually painted in--it's the "open window" effect you sometimes see in photographers' backdrops of the past. Search me; my guess is that maybe the backdrop was so old it was beginning to fray on the left edge and the blanket was put in to conceal the damage, then another at right for symmetry. I'm sure that originally you could see the entire window frame. No, that's an extra piece of cloth stuck in to camouflage the wall down there. Originally there would probably have been a piece of furniture or some vegetation below the bottom of the backdrop.

That's right, a photographer's studio. Like a photobooth, only bigger. Yes, there were studios for every budget. I don't know, probably bought his props secondhand. I'm guessing that this was just a very small space--in an apartment, maybe, or the back room of a candy store or a beauty parlor. Very cheap, I can only surmise--as much as a dollar? Maybe not even that. Fifty cents? Less? No, definitely not a passport shot or even a driver's license picture. Well, because most people didn't have cameras then--poor people, that is. Nobody in my own family owned a camera at the time. Oh, about a decade later, say. By the early '60s the most basic Kodak Brownies had become so inexpensive that everybody owned one, or was close to someone who did. Probably to send to her sweetheart. Maybe her family, but while I could be wrong, the hand-coloring says "romance" to me.

To do something with her hands. Most people who aren't models don't know what to do with their hands. Yes, those are the straps of her handbag around her wrist, and you're right, what I had initially taken for a cigarette probably isn't one. A scrap of paper, bearing name of sweetheart? Possibly, but... Lipstick tube? Doesn't seem like the right shape, but you never know. Waist-level, I guess. Beats the tar offa me--because the photographer had a morbid fear of cutting off his subjects' feet? Of course he could have, but maybe she was unusually tall and he didn't recalibrate. That's right, exactly what I was thinking. It's the effect of her being jammed up into the top of the composition that gives the picture its extra poignancy.

She's naturally glamorous, when she's walking down the street, say, but here she's a bit hesitant. Not nervous exactly, but as if she's not quite ready and maybe never will be ready. She's not used to being photographed, and doesn't know how to employ the space or adjust her face to the particulars of the lens. So it does seem intrusive, even though she's a fully consenting partner in the enterprise. That's right, it does possess a quality that's not unlike a mugshot. But are we really judging her? More like we're judging the photographer, I'd say. Well, what do you think: after you're dead, would you rather that images of you be trashed, cease to exist? Or that they survive to be looked at by strangers who will invent a life story for you, one that stands at a 180-degree angle from the real but irretrievable one?
Posted by The All-Seeing Eye, Jr. at 11:35 AM