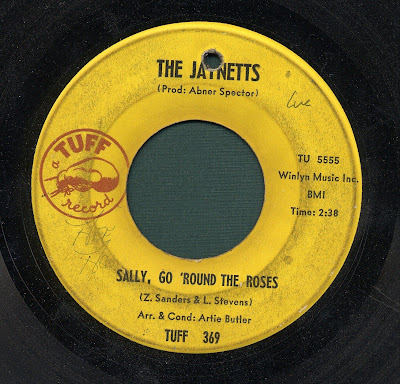 “Sally Go Round the Roses” is a strange song that can seem as though it is following you around. A writer somewhere called it an ovoid, and that seems apt. The instrumental backing is functionally a loop, a brief syncopated phrase led by piano and followed by bass fiddle and drums, that repeats as often as a rhythm sample. It makes the song float, hover like a cloud. Sitting on top of the cloud are girls, a lot of girls, at least eight of them in multitracked call-and-response, at once ethereal and obsessive. The chorus tells Sally to go round the roses, that the roses can’t hurt her, that they won’t tell her secret. It tells her not to go downtown. It tells her to cry, to let her hair hang down. It tells her that the saddest thing in the whole wide world is to see your baby with another girl.

The record is credited to the Jaynetts, although that seems to have been a label applied by the producers to various aggregations assembled in studios on various dates with varying results. There were other songs with that attribution; they left no mark on the world, nor did they deserve to. This one made it to number two on the charts in 1963. Even the first time you hear it, it sounds as if you’ve always known it. It comes over you like a glow or a chill. It comes over the couple as they sit, shivering, on the rooftop of an old building in Chinatown. It is August, but that does not prevent the air from feeling glacial. They’ve been talking all night, at cross-purposes. Each feels that only a personal failure of rhetorical skill prevents the other from embracing the correct view. But every clarifying or corrective word widens the gulf.

How many Jaynetts were there? Did they ever appear before an audience? What did they look like? Did they wear bouffantes and long gold lamé dresses, or kerchiefs and sweatshirts and three-quarter-length pants? How was the song heard by its first listeners? How is it heard today? Did everybody but us mistake it for an ordinary anodyne pop song? Where did the song really come from? Was the song actually written by someone who sat down at the piano one day? Was it sung to the pretended author in a bar by a stranger who thereupon dropped dead? Did it just somehow materialize, in the form we know today, on a reel-to-reel tape with no indication of origin? Why does it seem to resist the grubby quotidian context from which all things come, particularly pop songs aimed at a nebulously conceived teenage audience? Is it simply a brilliant void like those that periodically inflame the popular imagination, which allow their consumers to project any amount of emotional intensity upon them and merely send it back in slightly rearranged form, so that it can seem to anticipate their wishes and embody their desires and populate their loneliness and hold out a comforting hand, when it is in reality nothing but a doll with mirrored eyes?

Now they’ve stopped talking, from fatigue and futility. They’re drained, and that in concert with the cold air makes them feel as if they’re drifting, carried by breezes far from their rooftop and away over the city, over its skyscrapers and bridges, flung this way and that, speeding up and slowing down, weightless as a couple of feathers. There are trucks moving below them, and pigeons at eye level, and up above is the contrail of a jet. There are few lights on in windows, no visible humans anywhere. They sit, or float, atop a dead city, enmired in a darkness that does not even manage to be satisfyingly black. Just then the sun’s first rays point up over the horizon and begin to describe a fan, each separate ray distinct, almost solid. It is the dawn as represented in nineteenth-century anarchist engravings: the advent of the new world. Silently they regard this phenomenon. It seems cruelly and pointlessly ill-timed, purely gratuitous and designed to mock them. It is the earth’s epic ritual enactment of beginning, and they are at an end. They become aware once again of the song, hovering over the rooftops, emanating from some unseen radio. Sally goes round the roses and keeps going around them: it is a circle. It has no point of entry or exit. They have no purchase over it, no more than they have power over the sun. It, whatever it might be, will continue beginning and ending, over and over and over again, per omnia saecula saeculorum.
Posted by The All-Seeing Eye, Jr. at 11:14 AM