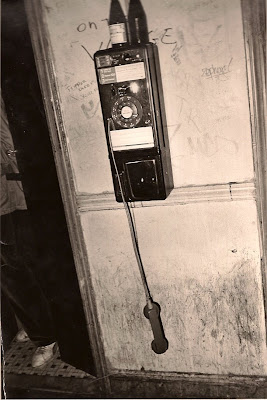 I went over to M.’s to retrieve my letters and whatever else from the four big crates of stuff she salvaged from E.’s apartment when E. entered the nursing home a few months before she died. It took me a few years to work up the courage to ask. I wanted the letters, I justified, because they were probably the closest thing to a diary I ever kept, in the key years 1979-1983. In other words I was exercising my usual dodge, which is to turn all of life into research materials. M. was game if not exactly eager. One corridor of her apartment is choked with boxes--the rest consist of her father’s belongings, and they will undoubtedly soon be joined by her mother’s. She hadn’t opened any of the crates since hurriedly packing them more than four years ago.

Late in the evening, after dinner, we began to dig. It was quite literally like entering a tomb. There was E.’s Perfecto jacket; there was a small box containing a gold tooth and a lock of her hair; there was a whole box of her eyeglasses. There were boxes and boxes of collage materials, of her photographs and negatives, of notebooks. There was copious evidence of her study of botany (she took university classes in the subject at some point), of her various pursuits of therapy, of her adherence to Buddhism (much more serious and longstanding than any of us unbeliever friends realized). And there were many bags and boxes of letters. This was just the stuff M. kept--I understood firsthand the harshness of trying to make those sorts of decisions, in a hurry and under major psychological stress, and my parents’ house didn’t even reek overwhelmingly of urine.

Going through the boxes caused me to enter a state that I suppose was not unlike shock. I took my letters and nothing else, went back to my hotel and read all of them, then couldn’t sleep. On the one hand I wasn’t wrong; the letters are indeed the only real record I have of those years, and I have nothing to cringe about concerning their style or expression--E. always brought out the best in me that way. They are full of detail about those days, that is when they don’t consist of naked pleas. Reading them felt vertiginous, like being admitted back to that apartment on First Avenue for fifteen minutes of an afternoon in 1979 and experiencing all over again the despair and optimism and boredom and love and fun and heedlessness and anguish of that time. And it brought her back into a kind of three-dimensionality that I’d forgotten--my jealousy rushed right back. There were a few unmailed letters from her to me, too. One of them, from after her last visit to New York in 1990, may be the most romantic letter she ever wrote me. I can’t help but speculate on what would have happened had I received it.

She was getting crazier and crazier as well as sicker at the time. Photographs of her from before she became immobilized by her illness show her grinning wildly with a missing front tooth, aggressively unkempt, looking like someone who’d hit you up for spare change in Tompkins Square Park. Could I imagine myself nursing her until her death? But she wouldn’t have permitted that anyway. M. reports that at her memorial the room was crowded with people, few of whom knew any of the others. She needed to compartmentalize her life, and that was one of our chief stumbling blocks as a couple. Of course I understood, since I have similar tendencies, but I wanted her exclusively. I can’t begin to account for the chaos of emotions this has all raised in me, the sheer number and variety of them. Part of me wanted to take those four crates--M. doesn’t know what to do with them. They are E.’s life, her complexity, her unbelievable array of talents and their utter dissipation. She’s going to haunt me for the rest of my days--do I wish I’d never met her? But that’s like trying to imagine my life as another person. She changed me, totally and irreversibly.

Interesting to hear M. say that as far as she’s aware E. cracked at some point in her last year of high school, and was never the same again. A banal incident--she backed over a row of metal garbage cans while trying to drive (she was always an awful driver)--sent her over the edge. M. dates E.’s cruelty to her (she was consistently vicious to M.), among other things, to that time. That sounds too neat, but who knows? In my experience she didn’t start seeming or acting weird until we’d been together about nine months, maybe sometime in the spring of ‘75. Here’s a random snapshot of E.: One time during her next-to-last New York visit (’87?), M. and her boyfriend of the time were going to a club and invited E. to come along. She insisted on stopping to get some takeout food, and then, to M.’s and boyfriend’s dismay, insisted on bringing it into the club to eat. You didn’t do things like that in clubs by that point. To me the story graphically illustrates an aspect of her. She specialized in the inappropriate. You’d constantly be wondering: What’s the deal, exactly? Is it that she wants to accommodate her own needs and conveniences regardless of whatever social codes are in effect? Does she mean to provoke? Is she oblivious to the reactions of others? Does she want to reorganize the whole world, starting here and now? Is she deliberately doing something gauche as a way of wrestling with her feelings of inadequacy and gaucheness? It may have been that all of those things were true, and that even ranking them in order of importance would be irrelevant. I could go on, but I won’t.