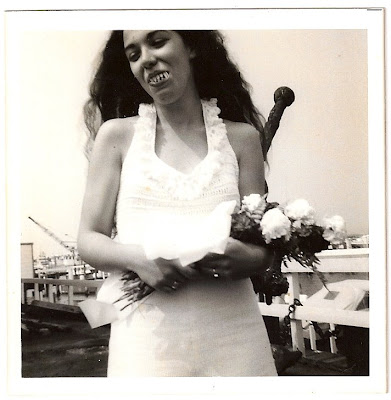 Historically, she got off the bus. Most of the rest is conjecture on my part, but she did get off the bus, in the aquarium depths of the lowest platform at Port Authority, a bus of the Pallas Athena line, from someplace in New Jersey--western New Jersey, she insisted, out near the Red River declivity, where the mesas begin, “the biggest sky you ever saw.” West of Trenton, even. She claimed there were fourteen people in her family and that she had to leave because they needed her room to lodge hands for the pea harvest. She carried a large plastic suitcase and an army duffel bag reinforced with duct tape. They were too heavy for her, so she dragged them along, past all the chaotic intersecting lines of people waiting to get on other buses, past the black nun with a basket on her lap at the foot of the escalator, past the lunch counters and drugstores and necktie displays, past the hustlers and the plainclothesmen and the translucent figures who came to the terminal just because they liked the smell of people.

She marched through the main hall and out the glass doors onto the avenue, and then, I imagine, she unhesitatingly turned right and started downtown, because she wasn’t one to dally. I can see her plowing down the avenue with her twin cargo containers angling out behind her, scattering the lunchtime crowd like bowling pins. She cut quite a figure at five foot nothing in boots, although I don’t know if she yet had the black leather Perfecto jacket she was to wear in every possible kind of weather. Her hair was long then, gathered in one braid like the heroine of a Chinese proletarian opera. She hadn’t yet started on her campaign--spectacularly unsuccessful--to make herself unapproachably ugly, so her glasses were delicate wire things rather than welder’s goggles with perforated side-pieces. She looked about fourteen, maybe even nine in certain kinds of light, and yet there was something about her, some kind of juju she emanated, possibly the adamantine stare that seemed to precede her into a room, that caused grown men to tiptoe around her. Whatever she was wearing, nobody would have given her any guff about running over their toes with her ten-ton bags.
Posted by The All-Seeing Eye, Jr. at 10:46 AM