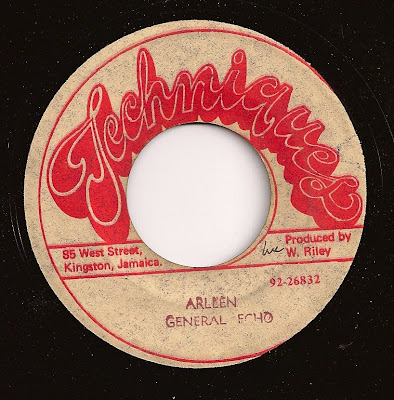 Let me play you "Arleen," by General Echo, a seven-inch 45 on the Techniques label, produced by Winston Riley, a number one hit in Jamaica in the autumn of 1979. "Arleen" is in the Stalag 17 riddim, a slow, heavy, insinuating track that is nearly all bass--the drums do little more than bracket and punctuate, and the original's brass-section color has been entirely omitted in this version. I'm not really sure what Echo is saying. It sounds like "Arleen wants to dream with a dream." A dream within a dream. Whether or not those are his actual words, it is the immediate sense. The riddim is at once liquid and halting, as if it were moving through a dark room filled with hanging draperies, incense and ganja smoke, sluggish and nearly impenetrable air--the bass walks and hurtles. Echo's delivery is mostly talkover, with just a bit of sing-song at the end of the verse. It is suggestive, seductive, hypnotic, light-footed, veiling questionable designs under a scrim of innocence, or else addled, talking shit in a daze as a result of an injury: "My gal Arleen, she love whipped cream/ Everytime I check her she cook sardine...."

General Echo, whose real name was Errol Robinson, was prominent in the rise of "slackness," the sexually explicit reggae style that began to eclipse the Rastafarian "cultural" style in the late 1970s; his songs include "Bathroom Sex" and "I Love to Set Young Crutches on Fire" ("crotches," that is), as well as "Drunken Master" and "International Year of the Child." He had his first hit in 1977, put out three albums and a substantial number of singles--an indeterminate number because of the chaos and profusion of Jamaican releases, then as now. Along with two other members of his sound system, he was shot dead on the street by Kingston police in 1980; no one seems to know why.

I bought the record at the time it was on the Jamaican charts, from some punk store in downtown Manhattan. I first heard it at Isaiah's, a dance club that materialized every Thursday night in a fourth-floor loft on Broadway between Bleecker and Bond. This was a few years before the enormous wave of Jamaican immigration to the United States, which was mainly a phenomenon of the later '80s and a result of the kind of violence that killed General Echo. Nevertheless the club regulars were more than half Jamaican transplants, nearly all of them men. The walls were lined with impassive types wearing three-piece suits in shades of cream and tan, and broad-brimmed, high-crowned felt hats that looked at once Navaho and Hasidic, with their locks gathered up inside. They danced as if they didn't want to dance but couldn't entirely contain themselves--the merest suggestion of movement: a shoulder here, a hip there. It was hard not to feel judged by this lineup; I kept ratcheting down the enthusiasm level of my dancing. But they didn't even see me. Whatever else might have been going on in their lives they were, in immemorial fashion, bachelors at a dance, and this gave the club a taste of the grange hall. Sometimes I went there with a girlfriend, sometimes with a group of people. We smoked weed and drank Red Stripe and sometimes inhaled poppers, which would lend you huge brief bursts of euphoric energy and then foreclose, leaving you in a puddle. I hardly ever made it to the 4 AM closing because the next day I had to work, and four hours' sleep made me feel sick. As a result I missed all the incidents involving guns, which invariably occurred at the end of the night. The club would have to shut down, for weeks or months at a time--it was anyway unclear what went on in the loft the other six nights and seven days; maybe people lived there. Eventually the owners installed a metal detector, the first one I ever encountered, little suspecting they would one day be ubiquitous.

We went there for the bass, and the trance state resulting from hours of dancing to riddim that stretched forever, the groove a fabric of stacked beats fractally splitting into halves of halves of halves of halves, a tree that spread its branches through the body, setting the governor beat in the torso and shaking its tributaries outward and down through shoulders, elbows, hips, knees, feet so that you couldn't stop except when you collapsed. Most often I went there with E., who danced like a whip, and who could keep on well past my exhaustion limit, and because I needed her I did so, too. Dancing was our chief mode of communication, an intimacy like two people sleeping together in different dreams, our bodies carrying on a conversation while our minds were in eidetic twilight. Neither of us really trusted language with each other, so we found this medium of exchange that trumped it, precluding silence and misunderstanding. She had a small body whose axis was set on powerful hips with an engine's torque, while above the waist she was all moues and flutters, a belle minus a carnet de bal, so that the sum of her was exactly like the music: the massive horsepower of the bass below and the delicate broken crystal guitar and plaintive childlike melodica above.

We lived in that place called youth where everything is terribly, punishingly final day by day, and at the same time tentative and approximate and subject to preemptive revision. We broke up and got back together, again and again, we lived together or we lived at opposite ends of the island, then she moved west and didn't come back, and I went out there but elected not to stay. Then her body betrayed her. She became allergic first to television, then to television when it was turned off, then to inactive televisions downstairs or next door, then to recently manufactured objects, then to so many various and apparently random stimuli she became her own book of Leviticus. Then her muscles gave way and she couldn't dance, then couldn't walk, then couldn't speak, and in the end became just a head attached by a string to a useless doll's body before she stopped being able to swallow and soon after to breathe.
Posted by The All-Seeing Eye, Jr. at 10:36 AM