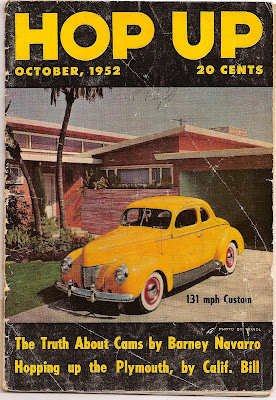 After I wrecked the gull-wing Porsche I acquired an Aston Martin--James Bond model, of course--then a Lotus when my Jim Clark fixation got into full gear. I never could afford the Isotta-Fraschini I truly coveted, but for daily use I could choose among a dandy Rover (right-hand steering, which could get a little tricky), a venturesome little Karmann Ghia, and a Citroen DS diverted from the French government fleet. Then, abruptly, I deaccessioned all my European automobiles and poured every cent and every ounce of energy into hot rods. I had the bucket "T", the chopped and channeled 1940 Plymouth, the fully blown 426 Barracuda. I had been content to let professionals maintain the factory specifications on my continental cars, but with these American babies I really worked. I spent all night cutting, sanding, drilling, welding, mounting, painting, waxing. My cars--and my planes, too, for that matter, but that's another subject--were the envy of the neighborhood. I traded one to a neighbor for a nearly complete set of Hardy Boys books, and another for the collection of arrowheads some kid was left by his grandfather. I still have those.

Then, when I was 14, I went off to New York City, and rarely thought about cars again. For a decade and a half I hardly so much as rode in an automobile. I didn't get my license until I was 30, and was well over 40 by the time I did any sort of regular driving. Now I drive all the time--I have no choice--but it's been all Toyotas and Subarus, the sexless shelf models, reliable as canned sardines. I don't have so much as a single battered Camaro on my résumé. I'm bitterly disappointed in my adult self. Yet at the same time I wouldn't be at all unhappy if cars disappeared from the face of the earth, as long as there were trains and trolleys to replace them. Cars were fun when there weren't so many of them on the road (and, it must be said, when gas cost 50 cents a gallon or thereabouts). Nowadays I think my car is useful and unobtrusive, and consider that I'm a fine driver--it's all those other cars that are the plague. But then I realize that every one of those other drivers is having the same thought.
Posted by The All-Seeing Eye, Jr. at 3:33 PM