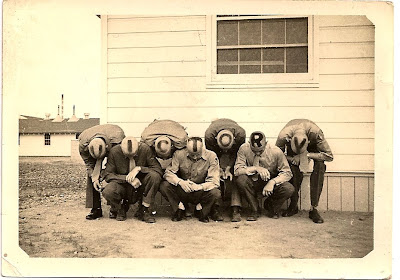 No, those are not tattoos, and they are neither skinheads nor football hooligans. The subjects are seven dogfaces from World War II. I don't have a date for the picture, so I can't tell if the shaving was done in anticipation or celebration. Here they are again in an informal grouping, looking a bit more greatest-generationish: 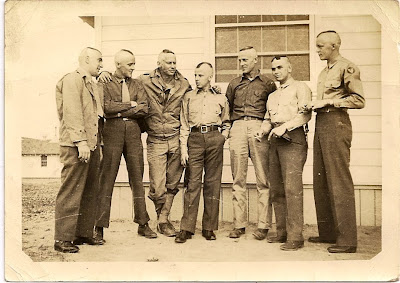 Note how Mr. O looks a bit like a member of the Monks (who indeed started out as G.I.s at a base in Germany). Except for Mr. R, who looks as if he were wearing a flower or a rubber glove on his head, the others in their diverse ways are all reminiscent of Travis Bickle.

I've always been curious about people's willingness to turn themselves into signboards. What purpose did those haircuts here serve? Was it limited to the photograph or photographs, or did they perform a routine at a USO-canteen pep rally? How drunk were they when they had the idea? How drunk were they when they carried it out? Did the exercise fill them with a greater sense of mission and achievement, give them a certainty of imminent victory, embolden them for greater challenges? They do look like a serious crowd. I'm sure that cheap laughs figured nowhere in their plans.

I confess that even temporary and transient forms of body modification make me queasy. Tattooing has a certain criminal allure even now, but the idea of wearing something you can't easily take off seems so burdensome I'm still at pains to understand it as the mass phenomenon it has become. Painting your face blue and yellow to cheer on the Fighting Coalheavers, on the other hand, may only last six hours, but those are six hours you spend as, essentially, an inanimate object, no matter how much screaming and jumping you do. You have converted yourself into a part--a grommet or a nozzle or a flange.

But maybe that's the whole idea. People--young people especially--find it burdensome to be themselves, and long for temporary escape into the world of thinghood. You are barely distinguishable from the other things all around you. You can make a spectacle of yourself with impunity, regress as violently as you wish, throw up all over the lobby and not be easily identifiable as the culprit. That wasn't what those G.I.s were after, of course, but their haircuts were still for them a way to shed their selves and merge into a unit, a human lexeme coextensive with the idea of victory itself. If you changed their circumstances just a trifle, they would be ideal candidates for roles as suicide bombers.
Posted by The All-Seeing Eye, Jr. at 6:21 PM