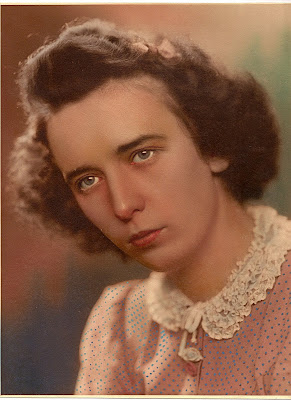 I never got around to asking my mother about the circumstances under which this extraordinary object was produced, so I can only conjecture. Had I found it in a pile at a flea market I would have assumed such a confection of airbrush and hand-tinting to be a generic romance image, such as the postcards you can still find in places like Greece or Mexico that feature a young woman looking misty, with or without a sentiment printed in cursive. Judging from the hairstyle I'd guess the picture was taken within a couple of years after the end of the war. This print measures roughly 9 1/2" by 7" and I also have a postcard version--on which the lips have been retinted bright red--so I think it might have been a package deal offered by a photographer: one large print and from three to five cards for one low price.

My mother is in her early twenties here, still living with her parents and employed by them as maid-of-all-work as well as holding down a secretarial position with a governmental family-welfare agency. She may not yet have met my father, for all that he sometimes lives with his parents directly across the narrow street from her. Marriage and family are her only prospects, aside from the nunnery the only ones even conceivable to a young woman of her time and her class. She has little education, has principally been schooled in sewing and penmanship. She has been through war, fear, hunger, cold, flight to the south of France in 1940 accomplished in part on foot, strafings by Stukas on the road, bombs falling within yards of her family's apartment, nighttime encounters with Wehrmacht foot patrols--yet none of this has managed to dent her innocence.

To me she is entirely enscribed in this picture: her hazily romantic dreams, her naiveté so profound it might be willed, her deeply buried intelligence, her sufferings at the hands of her family, her enclosing wall of fear, her cruel and only intermittently comforting piety, her constant depression that only fluctuated in its depth, her rigid mask of good behavior. I see a lot of myself in that face: eyebrows, mouth, maybe nose, shape of eyes. We shared many of our worst qualities. We were very close once, and then we weren't. My failings wounded her, and my successes meant nothing to her because they occurred in a world she couldn't or wouldn't understand. She screamed at me and then hung up on me the last time we talked before her death. Her account in my ledger will always remain troublingly open.
Posted by The All-Seeing Eye, Jr. at 2:53 PM