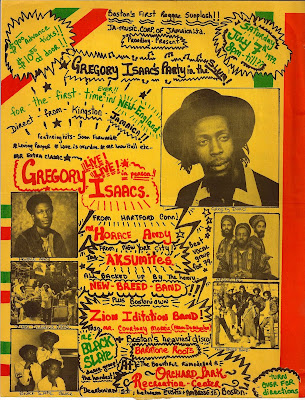 No, I didn't attend this show--it was in far-off Boston, and I had neither money nor a car. But the fact that the poster was put up somewhere in New York City for me to steal it tells you something about the reggae scene in 1979. There were relatively few Jamaican expatriates in New York then--there were considerably more in Boston, where I first heard the Wailers on the radio in 1973--but there were people in New York who would have traveled several hundred miles to catch Gregory Isaacs, the cool ruler, the lonely lover, appearing live. He certainly didn't play NYC that I knew about in those years, and I would have known.

His voice then--at least before he "macked it to shreds," in Robert Christgau's phrase--was syrup and pain and swagger all at once. Like the Rastas I'd see at Isaiah's on lower Broadway, who seemed barely awake as they hugged the walls, dancing with an occasional inflection of hip or ribcage, as if it were inadvertent, a reflex that happened to fall on the one, Gregory's affect was languid to the point of somnolence. He was totally bedroom. There was steel just underneath, however. You knew that if you crossed him you were done for. Listening to "Poor and Clean" or "Mr. Know-It-All" or "Stranger in Your Town," I could vividly imagine him slouching across the stage, eyes half shut, crooning into the mic as if he were asking for a glass of water, while the audience cried "Murderer! Murderer!" It was a standard Jamaican bravo of the time, but it just about summed him up.
Posted by The All-Seeing Eye, Jr. at 11:25 AM