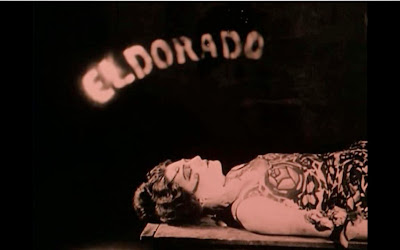 All photographs are ghostly to one degree or another, but silent-film stills truly belong to the realm of the uncanny. Photographs are ghostly because they are slices of the past; even pictures taken yesterday record things that no longer exist, if only the after-dinner still-life on the table. Silent movies, because of their limitations, were and are more specifically photographic than sound pictures--they could not rely on anything but the image to convey meaning. The most interesting silent movies made use of an arsenal of techniques for this purpose--double exposures, irises, split screens--that have largely disappeared from commercial cinema. In addition, silent movies relied on various pictorial and theatrical conventions that predated the motion-picture vocabulary and have since faded away.

Silent-film stills, then, are slices of heightened experience from the past, which at least potentially makes them preternaturally vivid, but they are mediated by ways of seeing and means of expression that are unfamiliar to us, making them to some degree alien. And since a still isolates one moment of a story, with the steps leading up to and away from it unknown to the viewer who hasn't seen the movie, stills are particularly mysterious and tantalizing--more so than the average photograph, which is designed to fit its entire story within its borders. Silent-film stills at their best are vivid, alien, enigmatic, and alluring all at once. They are not simply pictures of dead people in unguessable circumstances, but views of the subconscious residue of dead minds--a whole other planet.

Today I finally saw Marcel L'Herbier's El Dorado (1921), which I'd been wanting to see for twenty or thirty years, largely on the basis of this shot. It's a melodrama, as the credits announce immediately. The story is maybe laughable--it's a variant of Stella Dallas: the doomed low-life mother who sacrifices herself for the future of her child. It trades on the exotic power of Spain as it then was--the exteriors were shot in Granada and Seville--although most of the movie takes place in the titular nightclub, which in many ways is the same room as every casbah hotspot you've ever seen in the movies, from Casablanca on back. Everything of real visual interest happens in that nightclub: looming shadows, voracious mouths, insistent headgear, expressionistic decor, and smeary distortion employed to convey drunkenness and squalor.

The shot above occurs at the very end, and when I got there I felt as though I should have guessed its context from the start: she's dead, of course, and has now symbolically attained heaven, which is to say the real El Dorado. The lettering is the same as the nightclub's sign, only done up in what we're invited to see as gold. Appropriately, I feel like the man in Stephen Crane's poem, who sees a ball of gold in the sky, goes up to investigate and finds out it's actually mud, then comes back to earth and looks up, once again seeing a ball of gold. I have now seen the movie, which while it is a great deal more than mud is nevertheless a bit of a letdown. But the still retains its uncanny power. I could attempt to break it down: the shimmering letters, their appealing crudity, their relative size, her position relative to them, her position on the table, her makeup, her magician's-assistant bisection, her gravity--whatever. The picture forces my rational mind to surrender. It remains a mystery, even if I can account for all of its particulars.

Thanks to Benjamen Walker for making it happen.
Posted by The All-Seeing Eye, Jr. at 5:32 PM