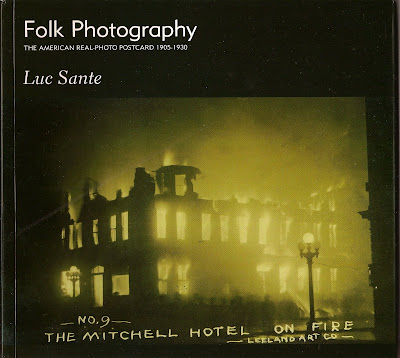 Although we here at Pinakothek pride ourselves on being above petty commercial considerations, we nevertheless wish to point out that the book shown above (published by the extraordinary Yeti Books/Verse Chorus Press of Portland, Oregon) is now stealthily creeping its way into stores and amazons (if not today, then tomorrow--or next week!)--and it's a heck of a book even if we say so ourselves. The text--a mere 25 pages; won't take you long even with today's reduced attention span--represents the boiling down of thirty years' thinking on the subject, and comprises a miniature theory of photography as a bonus. The pictures, 122 of 'em, display the United States (and Canada and Mexico to a smaller extent) of a century ago in all its messiness, sprawl, disaster, homely comfort, hard labor, pageantry, violence, optimism, piety, ignorance, hubris, imaginative flight, orderliness, grandeur, chaos, and pastoral quiet. If it were a movie it would be three weeks long and you'd still hate to leave your seat. The pictures are distant and immediate, beautiful and crude, and each one tells a story and leaves a mystery.

And here is a special bonus for Pinakothek readers. While we pride ourselves on the thoroughness of our research--tracking down the historical events behind many of the pictures in Folk Photography wasn't easy, while many proved impossible to crack--we completely missed the bus on one picture in particular, finding the story only after the book was already set.

The picture in question appears on p. 121, where it is suggested the setting might be Louisiana, since there is a town called Zion in that state. 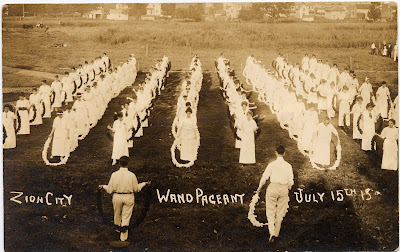 Here instead is how the caption should read:

Zion City was a utopian experiment built at the northeastern corner of Illinois by John Alexander Dowie (1847-1907), a faith healer who had emigrated from Australia. The city was thoroughly planned, with enlightened use of green spaces and orientation of houses to maximize exposure to the sun. It was also a theocratic state. Alcohol, tobacco, and gambling were banned, as well as theaters, circuses, novels, pork, oysters, politicians, doctors, tan-colored shoes, public displays of affection, and whistling on Sundays. These strictures were enforced by the Zion Guard, an 800-strong corps in blue uniforms with doves embroidered on their shoulders and the word “Patience” on their caps. At its height, around 1905, the city had some 10,000 inhabitants, in houses they leased from the ruling Christian Catholic Apostolic Church under terms set to expire in 3000 AD. Just at that point, however, Dowie suffered the first of a series of massive strokes. He was also accused of financial irregularities--which resulted in fiduciary setbacks that brought the city to the brink of dissolution shortly before his death--as well as rampant sexual misbehavior. Dowie, who had taken to calling himself Elijah the Restorer and affected garments inspired by those of the high priest of the temple of Jerusalem, died largely unmourned, but was immortalized as a minor character in James Joyce’s Ulysses. Under various successors, the city staggered along until the Depression, which finally vacated the earthly power of its church.
Posted by The All-Seeing Eye, Jr. at 1:50 PM