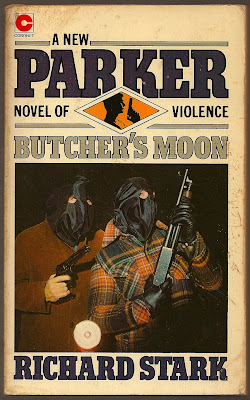 "Parker arrived at Tyler National Airport at two in the afternoon. The summer heat was shining, and the flat land all around the airport baked in the dry heat. The cab Parker had got into had a sticker on the side window saying it was air-conditioned, but the driver explained the air-conditioning had broken down at the beginning of the summer and the boss was too cheap to get it fixed. 'Because we'll turn this one in anyway in September, you know?'

"Parker didn't answer. He watched the billboards go by, advertising hotels and airlines and cigarettes, and after giving him one quick look in the rear-view mirror, the driver left him alone.

"Ohio House was a businessmen's hotel near the railroad station, thirty years past its prime.... There was a black and white television set on the dresser, covered with scotch-taped handwritten notices from the management. On it, Parker watched reruns and game shows and local news programs until dinnertime. He ate in the hotel dining room with half a dozen other men, each of them alone at a separate table, most reading newspapers, one studying the contents of a display folder. Parker looked less like a businessman than the rest of them, but it wasn't an impossible idea. He might have sold army surplus equipment, or burglar alarms, or special materials to nightclubs.

"After dinner Parker went back to the room again, but didn't turn on the TV set. He sat in the dark in the one armchair and looked toward the windows, watching the reflected light from the traffic down below...."